Enrico Ghezzi narrates 25 years of Blob [a text cut and edited by useless hands, without his knowledge]

“Patethically, my answer to those who seek information is that I’d define myself a RE- AUTHOR (of everything and nothing). Then, still for fun, I’ll say that, more than all the games and things that automatically and vainly help me or order me to form an anagram of the world, of all worlds, what still ignites me (but doesn’t yet satisfy me) is the knowledge of having been, with the anarcomunitarian dream having faded soon enough, a ridiculous, resisting, thorny ‘unmoved mover’ thanks to whom shows such as Schegge, FuoriOrario Blob ‘could’ be made. Out of 25 years of TV programs, only (?!?) this could proudly be claimed by the ghost that I am (the ghost of a Man that never wanted to become an author, nor to program). […] I happened to edit (after the first ten days of ‘rehearsals’ and the first week on air, with the famous opening made by cirogiorgini and me) something between one hundred and fifty and two hundred BLOB, on a weekly basis that over time has become increasingly rarified. In spite of this, there wasyears later- a month of daily frequency in the immediate aftermath of the 9/11 attack to the Twin Towers, when I was ‘sworn’ to continuous presence […] This inflicted measure in fact filled me with a near- cynical enthusiasm: I was condemned to do what I most naively and genuinely liked- namely, to exercise with utmost evidence the game of doing and undoing the inner workings of images […] Although we carried out a harsh- and yet, I think, sincere- form of criticism to the society of spectacle, as far as I was concerned, it was more a case of ‘supervising’ the function and fiction of the culminating phase of showbiz […]. Of course, abandoning oneself to the hubris and enjoyment of the permanent montage, of the shuffling and reshuffling of the deck […] is an illusory pleasure, a renewal of ancient rhetorical devices, of ‘artistic’ beliefs and authorial ideologies. […] Though admiring – precisely in its own tender and often honest ‘vanity’ – the diffused authorial vanity that each blob can induce, it hasn’t been long since I, me too, have been able to ‘inhabit’ the workplay situation with the maginificent. 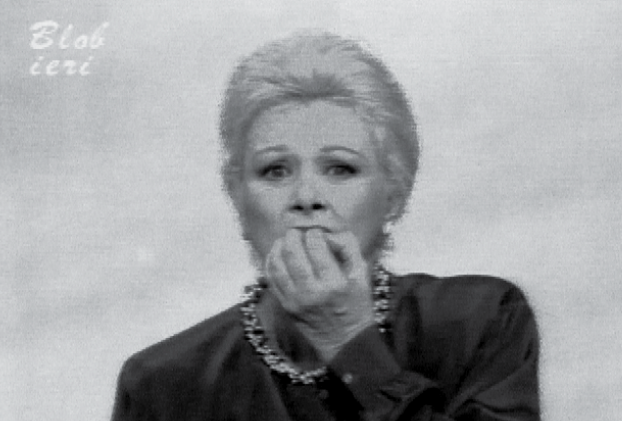