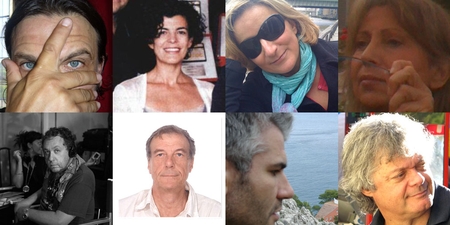 ANTONELLO RINALDI
He began his career as a writer at the age of seventeen, thanks to the publication of one of his novel by Mondadori. In the early 1980s he attended the DAMS in Bologna, and he dealt particularly with theatre, writing and playing many comedies. In 1988, he was among the finalists of the “Cento Cose – Oscar Mondadori” award with the novel “Anche tu a Malta”. In 1990 he moved to Rome, where he became disciple, collaborator and friend of Rodolfo Sonego. In the ten years that their fellowship lasted, along with projects never made into film like “Guglielmo Marconi” and “Australia”, he created episodes for Rai Uno series “Una famiglia in Giallo”, starring Ugo Tognazzi, and “Un commissario a Roma”, starring Nino Manfredi, and for Rai Due series “Provincia segreta” and “Provincia segreta 2”, starring Andrea Giordana and Isabella Ferrari. He contributed to the screenplay of the last Sonego’s film, “Il quaderno della spesa”, starring Gabriele Lavia,  directed by Tonino Cervi, and distributed by 20th Century Fox. In 1999 he joined the writing team of Canale 5 soap opera “Vivere”, for which, from 2003 and 2006, was in charge of dialogues. Afterwards he was story-editor for the soap opera “Sottocasa” (Rai Uno), script-writer and script-editor for “Incantesimo” (Rai Uno), and script-writer for “Agrodolce” (Rai Tre). In 2009, for the Elleffe Group led by Lorenzo Flaherty, he wrote “Coppia da sballo”, a brilliant action movie that in 2010 obtained state contribution and the acknowledgement as a film of cultural interest.

Doriana Leondeff was born in Bari to a Sicilian mother and a Bulgarian father. She earned her diploma in scripting at the Centro Sperimentale di Cinematografia of Rome in 1987. A year later she graduated in Literature from Università La Sapienza of Rome, with a thesis on Cinematographic History and Criticism. In the same year she was assistant director in the making of the film “Il tempo dei Gitani”, by Emir Kusturica. From 1988 to 1993 she collaborated with screenwriters Nicola Badalucco and Rodolfo Sonego on numerous films and television miniseries.  In 1995, she started a collaboration with Silvio Soldini, and they wrote together “Le acrobate”, “Pane e tulipani”, Brucio nel vento”, “Agata e la tempesta”, “Giorni e nuvole”, “Cosa voglio di più”, “Il comandante e la cicogna” (currently on production). In 1998 she was awarded the Grolla d’Oro at Saint Vincent Film Festival for the screenplay of the film “Vite in sospeso”, by Marco Turco, awarded also as the best first work. She was the author of the scripts of the films “La parola amore esiste” by Mimmo Calopresti, “Lezioni di volo”, by Francesca Archibugi, “Il grande sogno”, by Michele Placido, “Quando la notte”, by Cristina Comencini. Since 2003 she has collaborated with Carlo Mazzacurati, with whom she has written “L’amore ritrovato”, “La giusta distanza”, “La passione”, “La regina delle nevi” (provisional title, currently on preparation).

EMILIO BOLLES
He was born Somma Lombardo, in the Province of Varese, in 1950. After university, he decided to follow the passion for cinema that dated back to his childhood. In 1976 he was in Rome, working as an assistant to Alberto Sironi, and in 1977 he met Mario Orfini, with whom he collaborated on “Porci con le ali”. After becoming Orfini’s associate, they produced films directed by Arbore (“Il Pap’occhio”, “F.F.s.s.”), the trilogy by De Crescenzo (“Così parlò Bellavista”, “Oi dialogoi”, “32 dicembre”), other films for theatrical release and television series. In 1986, together with Elda Ferri and Roberto Faenza, founded Hologram, a company developing software for cinematographic and television production. In 1987, with his production company, he carried out two films by Nino Bizzarri (“La seconda notte” and “Segno di fuoco”), and the first TV series (“Il commissario corso”, starring Diego Abatantuono) funded by the ECA (European Coproduction Association). In 1990 in London, together with Daniele Senatore e Jo Janni, founded JBS Vic Film, and developed two screenplays, “La Promessa” and “Five Years Sentence”, based respectively on Dürrenmatt’s novel “The Promise”, and Bernice Rubens’s homonymous book. Meanwhile, his friendship with Rodolfo Sonego evolved with the creation of two television scripts, “Guglielmo Marconi” and “Australia”, which were never produced. In 1994, he worked as a consultant for many companies, with which he produced, in 1996, “Jack Frusciante è uscito dal gruppo”, based on the novel by Brizzi. Afterwards he worked for various public institutions like RAI and the Presidency of the Council of Ministers. Since 2012, he has collaborated with the NUCT of Rome.

SILVIA NAPOLITANO
I first met Rodolfo Sonego as soon as I moved to Rome. With him I started working, and from him I learned everything. The first screenplay I contributed to was that of an episode of “Le strane occasioni”, and then there were “Le vacanze intelligenti”. Great fun, great education. Afterwards, a long work with Leone Colonna, for a film that was never made. The first film without Rodolfo was “Bugie bianche”, by Stefano Rolla. Later on, “Grog”, by Francesco Laudadio, “Flirt”, by Roberto Russo, “Giulia e Giulia” by Peter Del Monte. With the TV film “L’ultimo concerto”, by Francesco Laudadio, I started making television. So far I have made a lot: “Plagio”, by Cinzia Torrini, “Tutti gli uomini di Sara”, by Giampaolo Tescari, “Una storia qualunque” and “Un difetto di famiglia” by Alberto Simone, many episodes for TV series from “Scomparsi” to “Una madre detective”, to “Raccontami”. Another film for theatrical release, “Tre mogli”, by Marco Risi. Afterwards, the TV films “Un dono semplice”, by Maurizio Zaccaro, “Il mondo delle cose senza nome”, by Tiziana Aristarco, “La doppia vita di Natalia Blum”, by Anna Negri. The three seasons of “Commissario Soneri”, the first two directed by Riccardo Donna, and the last one by Giampaolo Tescari, the miniseries “Zodiaco”, “Il libro perduto”, by Tonino Zangardi. Currently I’m working with Franco Bernini on the miniseries “Olivetti, un imprenditore illuminato”, by Michele Soavi, and on two episodes of “In cielo e in terra”, a series by Carlo Lucarelli and Giampiero Rigosi.

MARCO MACCAFERRI
Marco Maccaferri, director and producer of fiction, video-musical, and artistic feature and short films, all presented in festivals and cinematographic events. For television, a film and art director of fiction works and situation comedies, and director of advertisements, film conventions, industrial documentaries and television reports. He has directed the feature film “Giorgia”, the Mediaset TV fiction film “L’ombra del diavolo”, “Il giro del giorno in 80 mondi”, video portrait of Enrico Rava, the sitcoms “Don Luca” and “Il supermercato”, and the fiction film “Affari di famiglia”, for the Televisione Svizzera Italiana. He is the art director of the soap opera “Vivere”. He is a director of the soap opera “Centovetrine”, and producer of the feature films “Come dire”, directed by G. Fumagalli, and “Gentili signore”, by A. Monti.

MANLIO PIVA
A liberal arts graduate, he has been a lecturer at DAMS in Padua since 2005 and has taught History of Italian Cinema at Boston University’s Italian seat. He also teaches Cinema and Electronic Media at Liceo della Comunicazione in Conegliano, he conceives and produces radio formats which he experiments with his students at a local radio. A passionate divulger of audiovisuals, he has collaborated with various formative agencies by publishing pamphlets, didactic proposals and, recently, a manual, “Il coccodrillo luminoso”, thanks also to the collaboration of Mediateca Cinemazero in Pordenone, to which Piva he is a consultant.

RITA DI SANTO
Rita Di Santo was born in Rome, and she is a film critic and historian. Doctor in literature, she worked at La Sapienza University in Rome as an assistant professor, and  she was co-director of the New Italian Cinema Film Festival in Rome (1997). Freelance reviewer for various national magazine and newspapers, she moved to London in 1999 and continued working as a film critic as correspondent for “il Manifesto” as well as contributing to other magazines. She worked for the London Italian Cultural Institute as the art director of the Italian Short Film and Independent Cinema Festival, and started working as a freelance for the British press. She is a member of the U.K. Critics’ Circle, a member of the International Federation of Film Critics (FIPRESCI) and a member of the International Press Academy. Currently she is the Morning Star’s film critic, writing weekly reviews and reporting regularly from Berlin, Abu Dhabi, Turin, Cannes, and Venice film festivals. She is a contributing author of “Michael Winterbottom”, published by the National Turin Cinema Museum in 2009.

ALEXIS SWEET
He started working in the English cinema in 1981, as an assistant director and director, working with masters like Hugh Hudson, Steven Spielberg, Joe Pytka, John Boorman, Ridley Scott, Nick Roeg, Richard Loncraine, Spike Lee, Mike Figgis, Tsui Hark and many others.
From 1995 to 2003 he devoted himself to numerous documentaries on African national parks, and projects funded by the European Union, and he made more than 100 TV advertisements. In 2003 he directed three seasons of “RIS – Delitti Imperfetti” (2003-2006), a TV series that set audience records in Italy. From 2007 to 2010, he directed the miniseries “Il capo dei capi”, “Intelligence – Servizi e segreti” and “Il tredicesimo apostolo”. Currently he is busy at work on co-directing with Alessandro Angelini “Il clan dei camorristi”, starring Stefano Accorsi and Giuseppe Zeno.